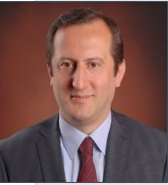 İbrahim Taşkın was born on April 15th 1965 in Trabzon. He went to primary school in Artvin and high school in Istanbul. He graduated from Istanbul University Faculty of Law in 1986. He served his military service as a disciplinary officer at military disciplinary court in Şanlıurfa in 1988.

Beginning from 1990 for four years he lectured constitutional law, criminal law, criminal procedure law and police profession code at Florya Police Academy in Istanbul. In between 1996-2004 he was involved in political activities with various assignments in addition to his career as a free-lance lawyer. He has been in charge of Legal Affairs of Yıldız Holding since 2004. Currently he is President of Global Legal Affairs at Yıldız Holding. He is also member of board of directors of many companies and member of board as a founder and/or director at various association and foundations. Besides his responsibilities at Yıldız Holding Group he is President of Discipline Committee, Food Safety and Defense Board and Global Legal Affairs at Yıldız Holding. He is married and father of four children. He speaks English.